California is currently facing a major housing crisis. California will need to build 1.8 million new homes and double its current rate of development in order to keep up with the growing population [1]. California also has a lack of affordable housing. Both housing and rent prices can be double the amount an Average American spends outside of California [2]. This has caused California to have the biggest homeless population in the country, with over 150,000 people currently living on the streets and the rate steadily increasing [3]. Additionally, due to a lack of housing in urban centers, the housing shortage promotes long commutes, which in turn contributes to GHG emissions due to there being more cars on the road [4]. Although Governor Newsom proposed to spend 1.75 billion to combat the housing crisis, much more will need to be done to keep up with the growing demand [5].

PCL is working with organizations and agencies to make sure that the housing crisis is resolved in a way that also addresses our climate and equity goals. One such solution is to promote infill development, which is when housing is built on vacant or under-used lots in urban areas instead of on undeveloped land. This not only decreases sprawl and protects green land from development, but also decreases GHG emissions and VMTs (Vehicle Miles Traveled) due to the proximity of the new housing to jobs, schools, and public areas. One of the downsides is that infill development is often much more expensive than greenfield development because of the additional costs of clearing existing structures, cleaning contamination, and adhering to local zoning laws.

Our Equitable Infill Incentives Report resolves to promote infill development by offering government incentives to projects that fulfill infill criteria. However, these criteria have not been properly defined by the legislature, so our first step was to find a universal definition of infill. We examined how this word is defined in a multitude of statutes, regulations, and grant program guidelines and then presented this problem to our allies in a Roundtable meeting and collected input on what parts of the definitions should be included in the final definition. The next step was to include as part of the definition a series of incentives that would prioritize sustainable and affordable development. We specifically focused on adding inclusionary and anti-displacement protections to make sure that the new development does not promote patterns of gentrification and segregation. Using a set of policy guidelines for investment without displacement developed by our partners at ClimatePlan, we proposed this issue as a series of questions at our next Roundtable meeting and gathered their thoughts on how to properly include these provisions in our definition of infill. The results from these two meetings as well as our analysis of the current definitions of infill are outlined in our report. The report also features VMT maps provided by our allies at the Center for Neighborhood Technology. These maps track the local income of residents and VMTs to show where affordable housing can be built to offer the most benefit to the community and the environment. 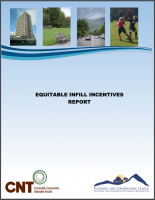 Click here to view more information on the VMT mapping.