The 911 call came in: Two big mountain lions hanging around town; hiding under a porch.  With no equipment to safely capture them and no backup on the way, officers shot and killed the cats.  After examining the carcasses, California Department of Fish and Wildlife (CDFW) learned they had killed two frightened, starving, and likely orphaned lion kittens, no bigger than a house cat.  The public was pissed.  No one knew at the time, but that fateful day in Half Moon Bay sparked the biggest change for California’s mountain lions in more than two decades.

While mountain lions in California have long been protected from trophy hunters, their fate is still not certain.  Even now, 23-years after the passage of Proposition 117, over a hundred lions are killed annually in California.  The majority are killed under depredation permits for attacking pets or livestock, but in recent years a growing number are also being killed just for wandering into developed areas and becoming inconveniences to responding authorities.

Such was the case with the Half Moon Bay kittens.  It was a cold and miserable, rainy day.  Ill equipped and untrained wardens, accompanied by San Mateo Sheriff Deputies had been responding to sightings of the two lions for a couple days and now they had been found hiding under an elderly woman’s front porch.

No one wanted to kill these animals but nobody on scene really knew what to do or who to contact for advice or assistance and everyone onsite was working under a series of false impressions and an outdated wildlife policy.

First, those witnesses who reported sighting the two kittens had incorrectly guessed the size of the animals so authorities thought they were dealing with dispersal-aged lions.  Usually those “teenage” lions are 1 ½ to 2-years old and weigh 50 or more pounds.  They are capable of hunting native prey and will typically leave a populated area if given time and space.  The incident necropsy later found these two particular animals to be dependent kittens, approximately four-months old and weighing only 12 and 14 pounds respectively.

Second, on the previous day the two lions had tried to get inside a house, so incident responders came to the conclusion that these lions had lost their fear of humans and subsequently were now a threat to the public’s safety.  Necropsy findings demonstrated that the two kittens were in fact starving and chances are they had been attracted to that residence in search of food.

This “loss of fear” conclusion was later reinforced with a failed effort to scare the cats back into the wild by jumping up and down and banging on the porch under which they were hiding.  If anyone experienced with lions had known the animals’ true age they would have realized the lions were behaving naturally.  Unlike older lions, kittens instinctually hide and stay still when confronted with danger.  Unable to outrun or fight off a predator, their best defense is to stay camouflaged and wait for mom to return.

Because the wardens had no equipment with which to actually execute a non-lethal capture, an attempt was made to acquire outside help.  Unfortunately, the local humane society group could not actively assist in capturing potentially dangerous wildlife.  However, they did offer the use of their dart gun, but Federal law prohibited them from providing the wardens with the necessary tranquilizer drugs so the offer was turned down.

Dusk had arrived.  At this point the situation changed from trying to drive the lions back into the wild to containing the animals.  The light was fading fast and wardens were afraid that in the dark the two lions (who were now considered threats) would escape and hurt someone.

So a decision was made and the two kittens were shot and killed.

It’s easy to sympathize with the first responders on scene.  They did not want to kill these two lion kittens, but a lack of equipment and the fear of someone getting hurt or killed by inaction became a sure recipe for a disaster—a disaster they could prevent.

The decision as to what actually constitutes “imminent threat” has always been left up to responding wardens who are too often concerned about “liability” issues and are rarely equipped for anything other than a lethal response.  Internal department guidelines also worked against non-lethal solutions.  Before the Half Moon Bay incident CDFW lion response guidelines dictated that any lion that came near humans (even benignly) was a public safety threat and had to be lethally disposed of: even if already captured alive.

Public outrage over the fate of the Half Moon Bay kittens became a springboard to finally change the Department’s “public safety” practices and guidelines.  Shortly after the killings, Senator Jerry Hill contacted the Mountain Lion Foundation (MLF) to determine whether laws might be changed in order to protect those lions that come into contact with humans yet pose no immediate threat to the public’s health or safety.

•  Requires the use of nonlethal procedures in human/lion conflict situations except in those cases where there is an imminent threat to public health or safety. And,

•  Authorizes CDFW to partner with qualified entities (including individuals and NGOs) to implement those nonlethal procedures.

Unlike other legislation, SB 132 has to receive a 4/5ths vote in both legislative houses to pass.  This is a result of restrictions emplaced under Proposition 117 to prevent arbitrary changes by anti-lion legislators. 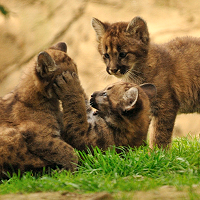 At this time, SB 132 is only halfway though the legislative process.  It has successfully passed through the Senate and has cleared the Assembly Committee on Water, Parks and Wildlife.  SB 132 has yet to pass the Assembly Appropriations Committee, and must still receive 64 out of a possible 80 votes once it arrives on the Assembly floor.

With a vote possible anytime after the Assembly Appropriations hearing on August 14th, time is critically short for any who wish to help pass SB 132.  Unfortunately the California legislature does not count letters sent via e-mail or on-line petitions, so old fashion communication techniques (phone calls or snail mail) to your individual Assembly Member will be the only real way to help influence the final outcome.

Remember, time is short so please call or write a letter of support to your Assembly Member today!

Tim Dunbar is the Executive Director of the Mountain Lion Foundation.