If you follow water policy, conflict and the Delta are nearly synonymous.  Decades of tug-of-war between maintaining adequate in-Delta flows and exporting water south of the Delta have left stakeholders jaded and seemingly unable to find a mutual long-term solution.

Last fall, these same stakeholders – environmentalists, water exporters, delta residents, and others – cautiously came together to see what they could agree on.  This effort excluded big picture items (leaving BDCP at the door was a ground rule), and focused instead on finding near-term projects that could gain broad support as being worthwhile to move through regulatory processes.  The Coalition to Support Delta Projects, a group of over 80 diverse stakeholders, originally expected to agree on perhaps 3 or 4 projects.  Remarkably, they reached consensus on 43 – and have since added 7 more to the list.

On September 25th, the Coalition teamed up with the Water Education Foundation to visit some of these projects in person on a one-day tour of the Delta.  The projects contribute to a range of improvements in the Delta, including flood control, levee stability, water quality, habitat restoration, and better knowledge of the ecosystem through research and education. Supporters of moving these projects forward believe these projects are all worthwhile regardless of the outcome of the Bay Delta Conservation Plan (BDCP), and other long-term planning efforts.

Not all of the projects are physically underway (or “moving dirt,” as PCL’s Jonas Minton would say) – some are still in the conceptual phase, and many simply need a final push of funding or an additional permit.  Every project comes with real challenges, but the mentality of the Coalition is that most of the issues can be resolved through honest dialogue among the people and agencies involved, and a deliberate commitment to work on the solutions rather than focus on the problems.  Collaboration isn’t easy, but it works – and provides hope that water policy in the Delta may not stay stuck forever.

Snapshots of the tour: 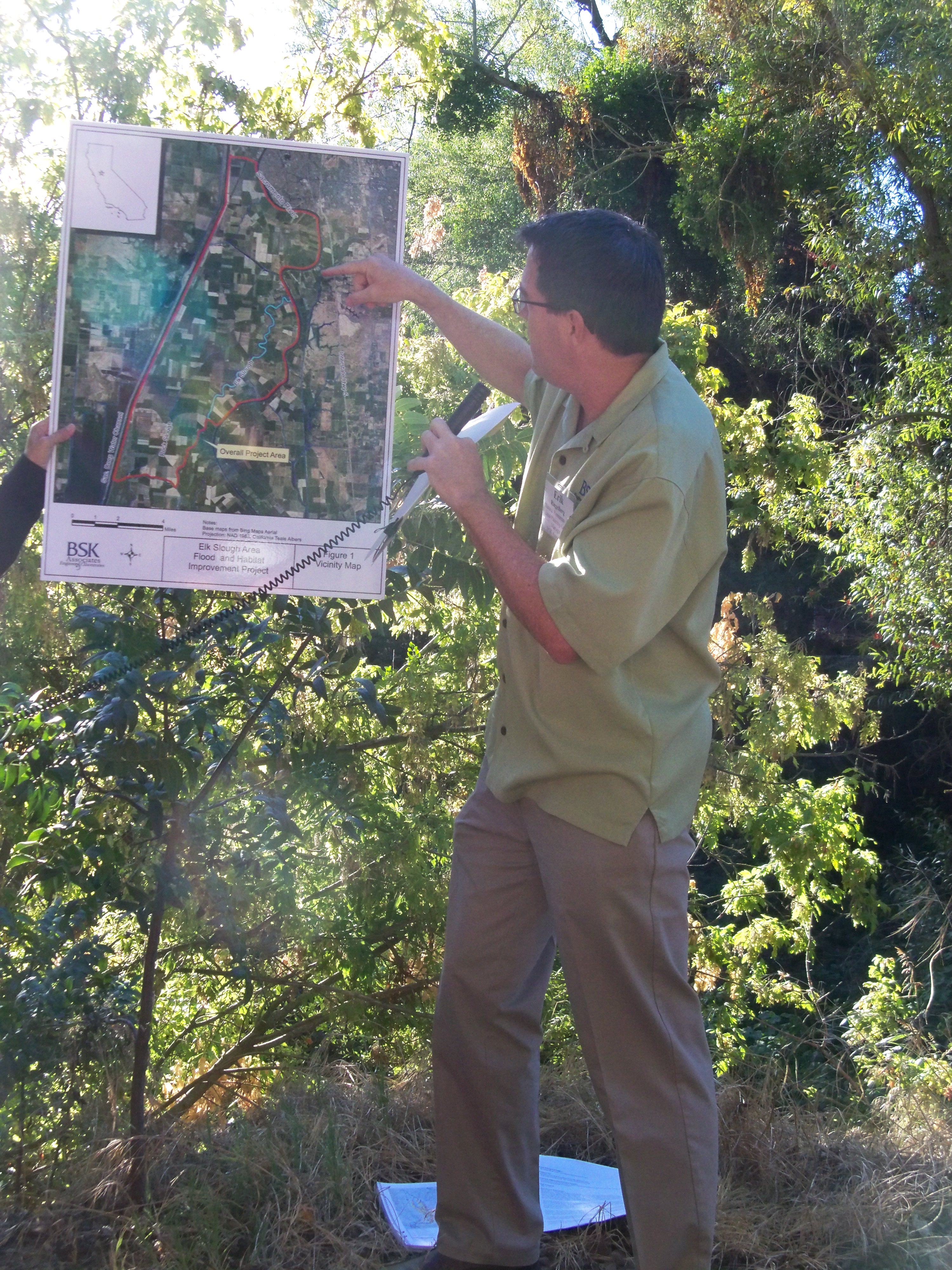 At Elk Slough: Erik Ringelberg (BSK Associates) laid out the details of turning this “tidally influenced dead end” into a more functional riparian environment with passage for salmonids and sturgeon, as well as the erosion control and flood management benefits the project would provide.  The Elk Slough project is still on the concept side, and Erik said it has stalled due to lack of funding and the high level of local match. 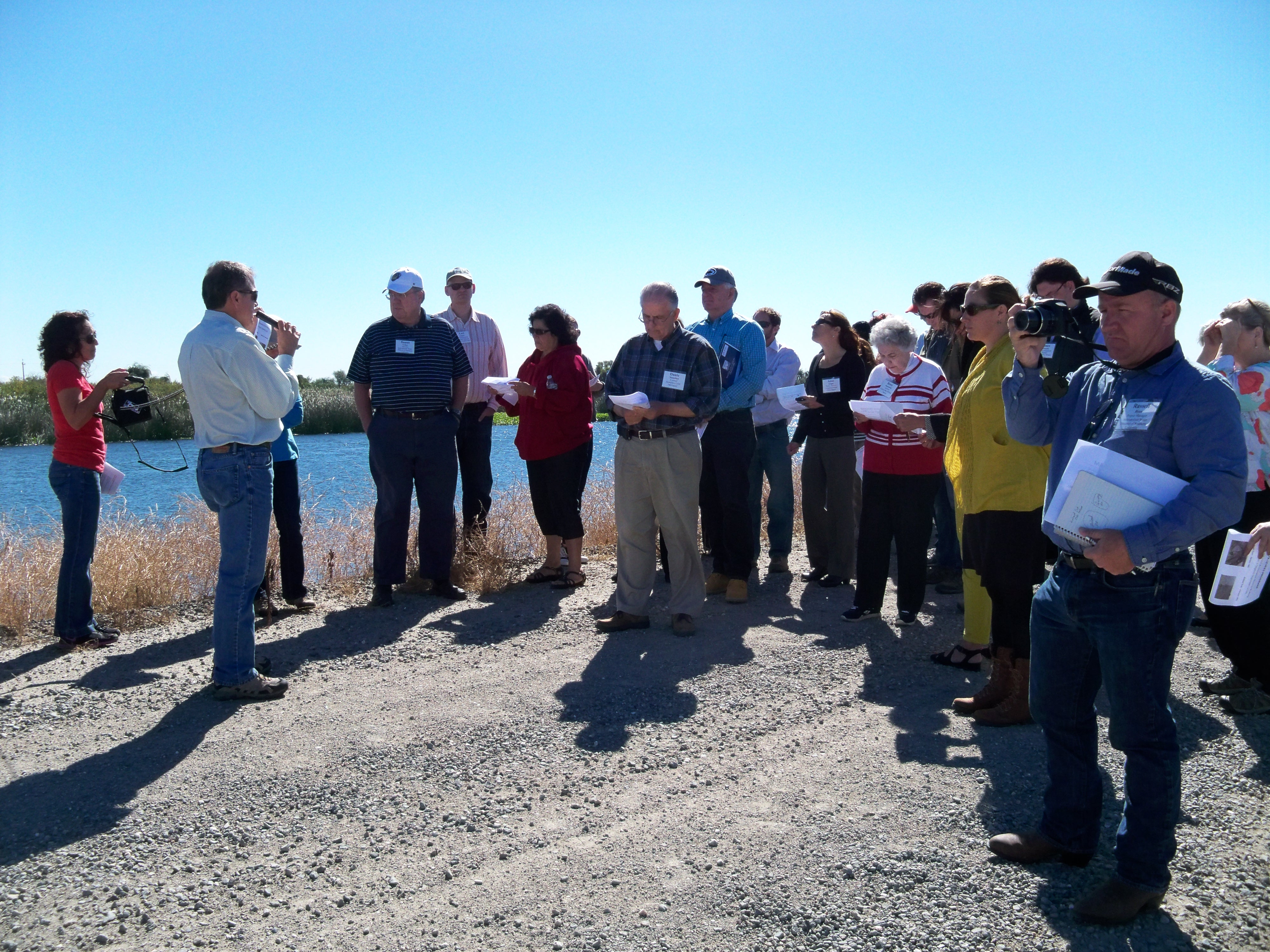 At Holland Tract: Gilbert Cosio (MBK Engineers) and Dante Nomellini (Nomillini Grilli McDaniel) discussed the need for a more robust levee system in the Delta, and the process of creating “fat” levees.  As David Mraz (Department of Water Resources) mentioned on the bus, the islands in the delta are actually bowl-shaped, with the land as much as 15-20 feet below the water level; without levees, the Delta would be a pool.  Strengthening key levees is also recognized as important by many because even if the BDCP moves forward, on average half of the exported water will still be diverted from the South Delta. 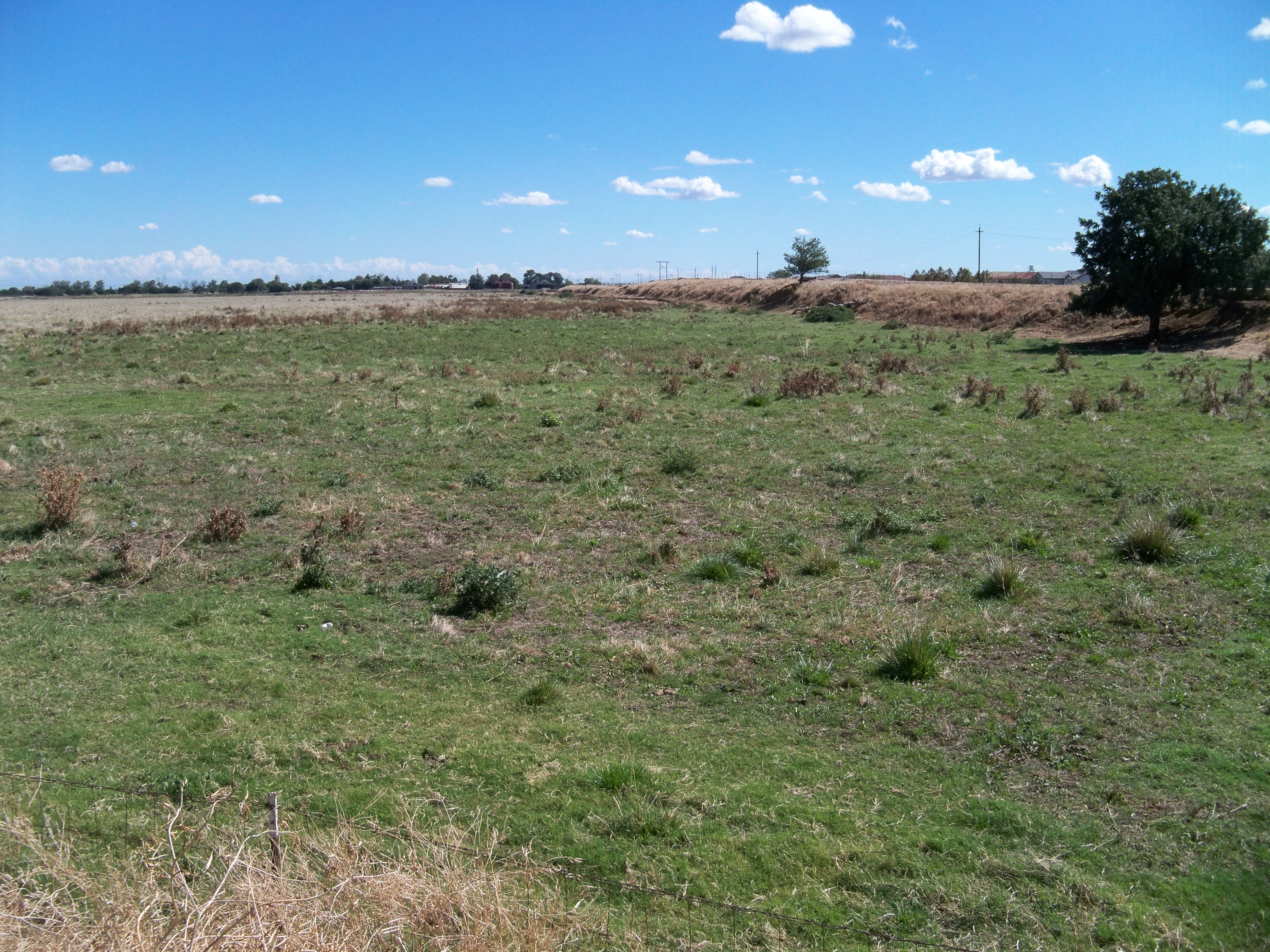 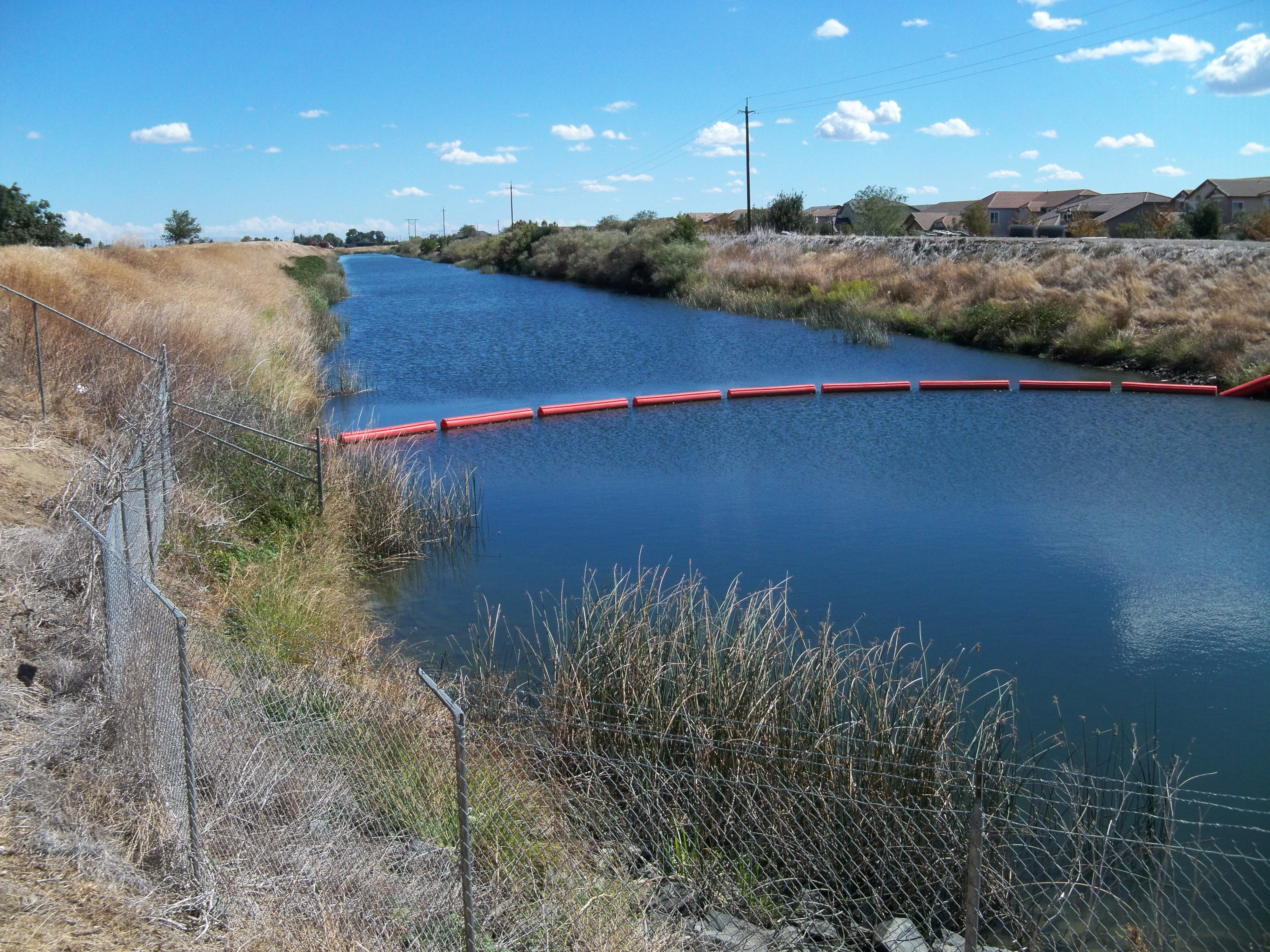 Dutch Slough tidal restoration site (left) and Contra Costa Canal lining project (right): Two physically adjacent projects whose proponents worked out major conflicts through creative problem-solving.  The problem: Adding brackish water to the Department of Water Resources’ Dutch Slough site for tidal habitat could have degraded water quality in the unlined Contra Costa Canal.  The solution: working in collaboration with DWR, Contra Costa Water District was able to use grant funds for a different section of pipeline to line the portion of the canal near Dutch Slough first, allowing both projects to proceed without issue. 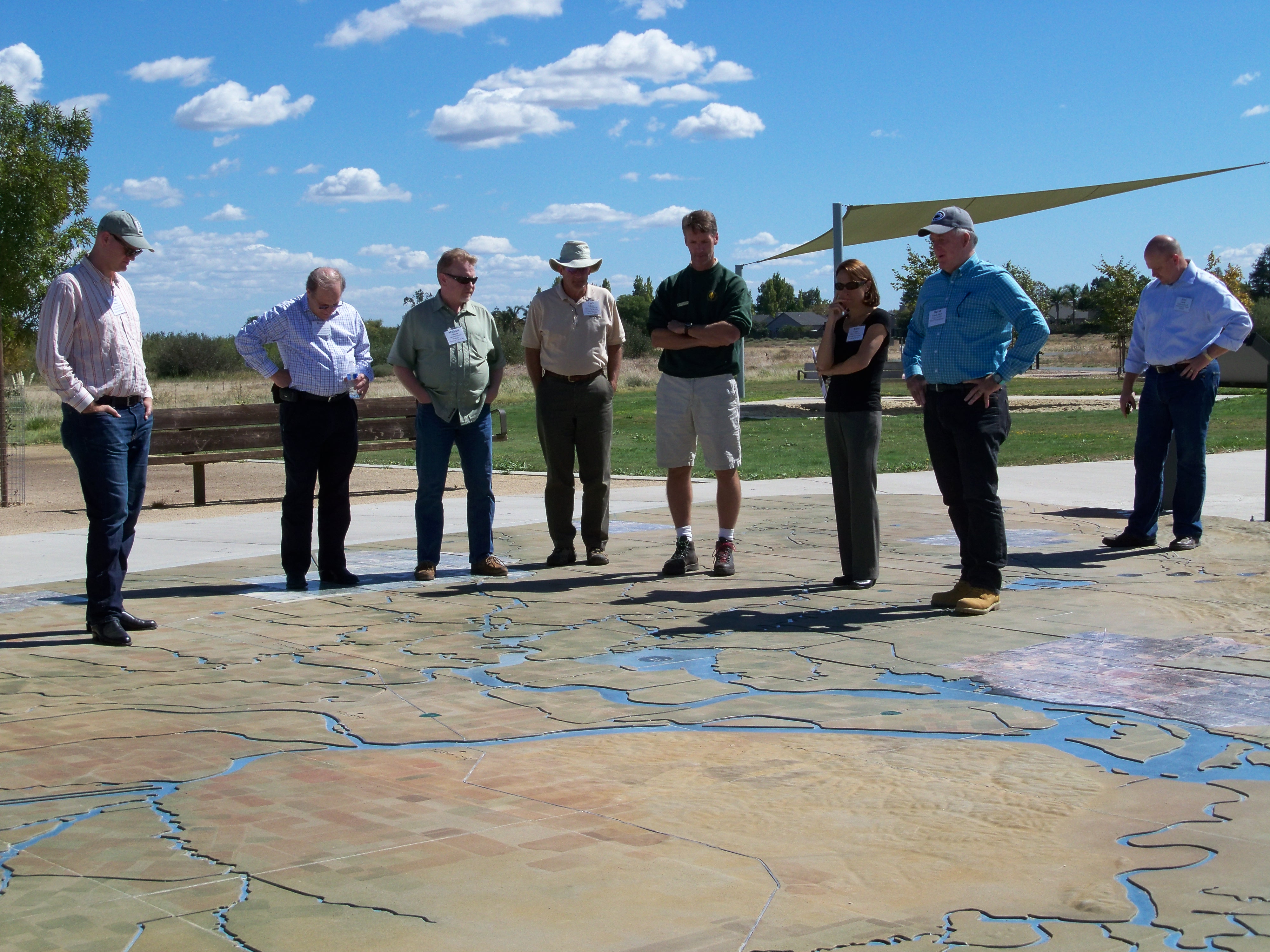 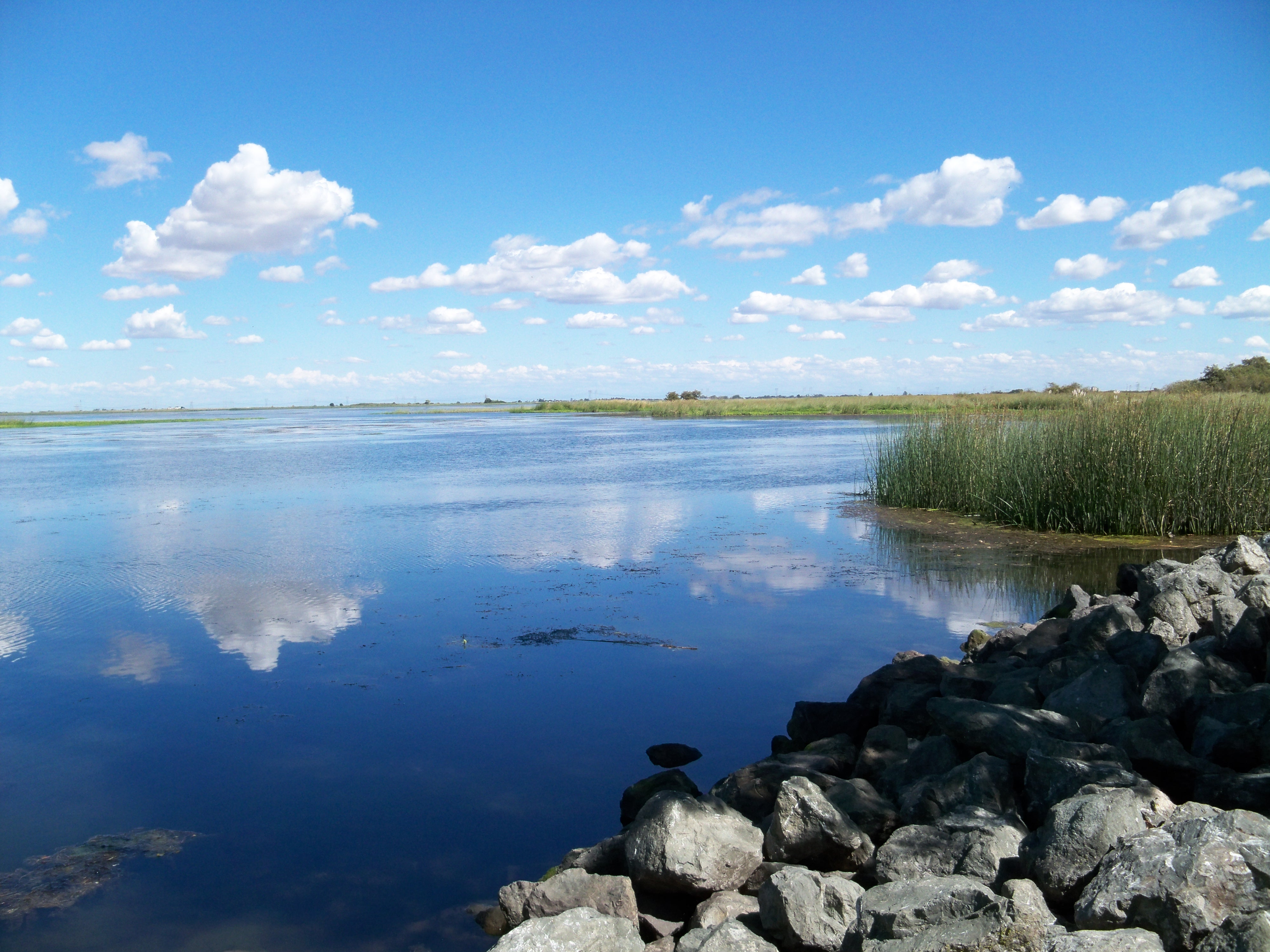 At Big Break Regional Shoreline: We stopped for lunch, and were fascinated by the massive, interactive map of the Delta.  If you haven’t visited Big Break for a picnic and a healthy dose of nature, be sure to do so! 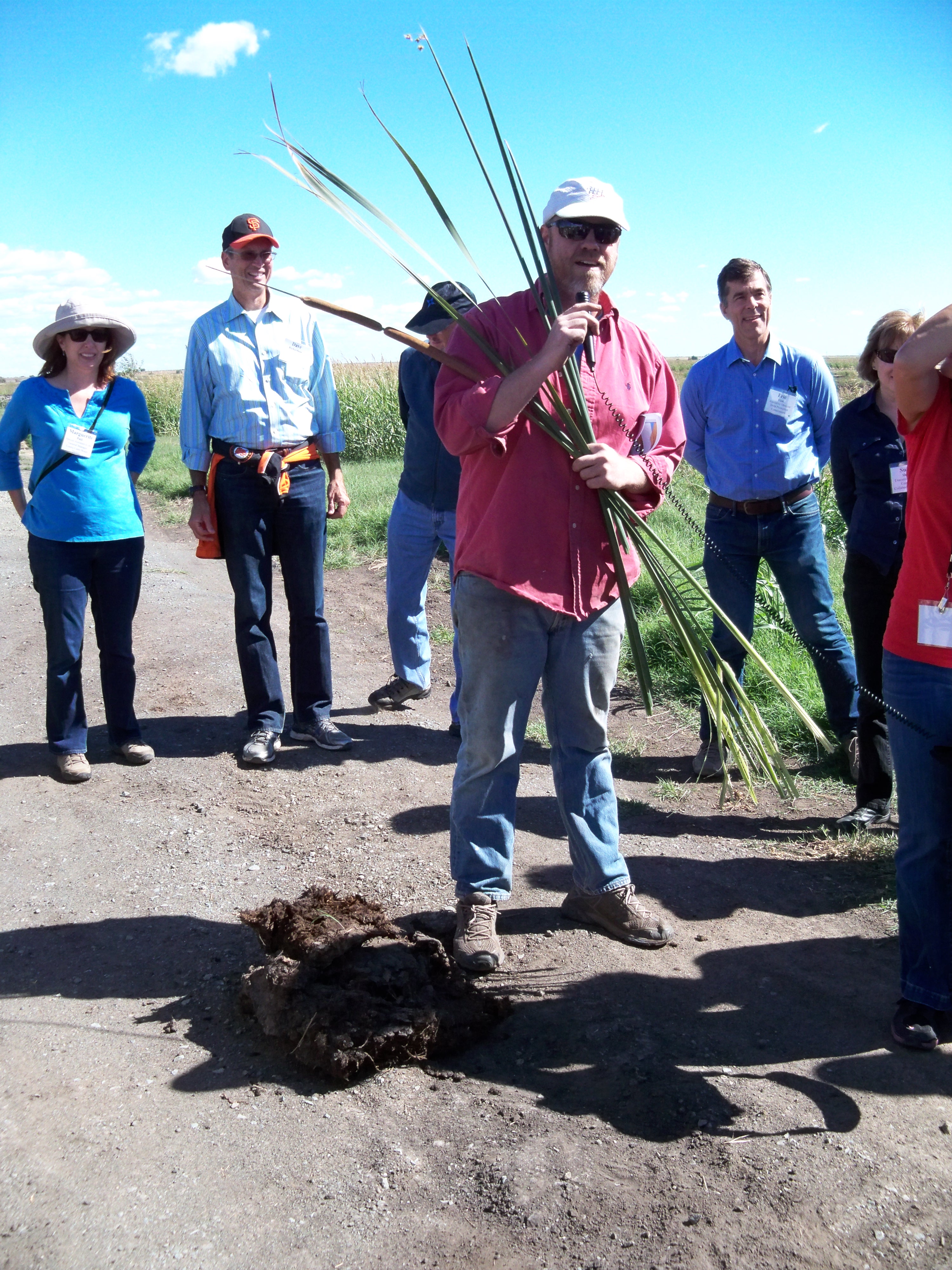 At Twitchell Island: Bryan Brock (Department of Water Resources) told us about successful pilot efforts to stop or even reverse subsidence on the island through carbon sequestration – by converting land to wetlands and rice fields. 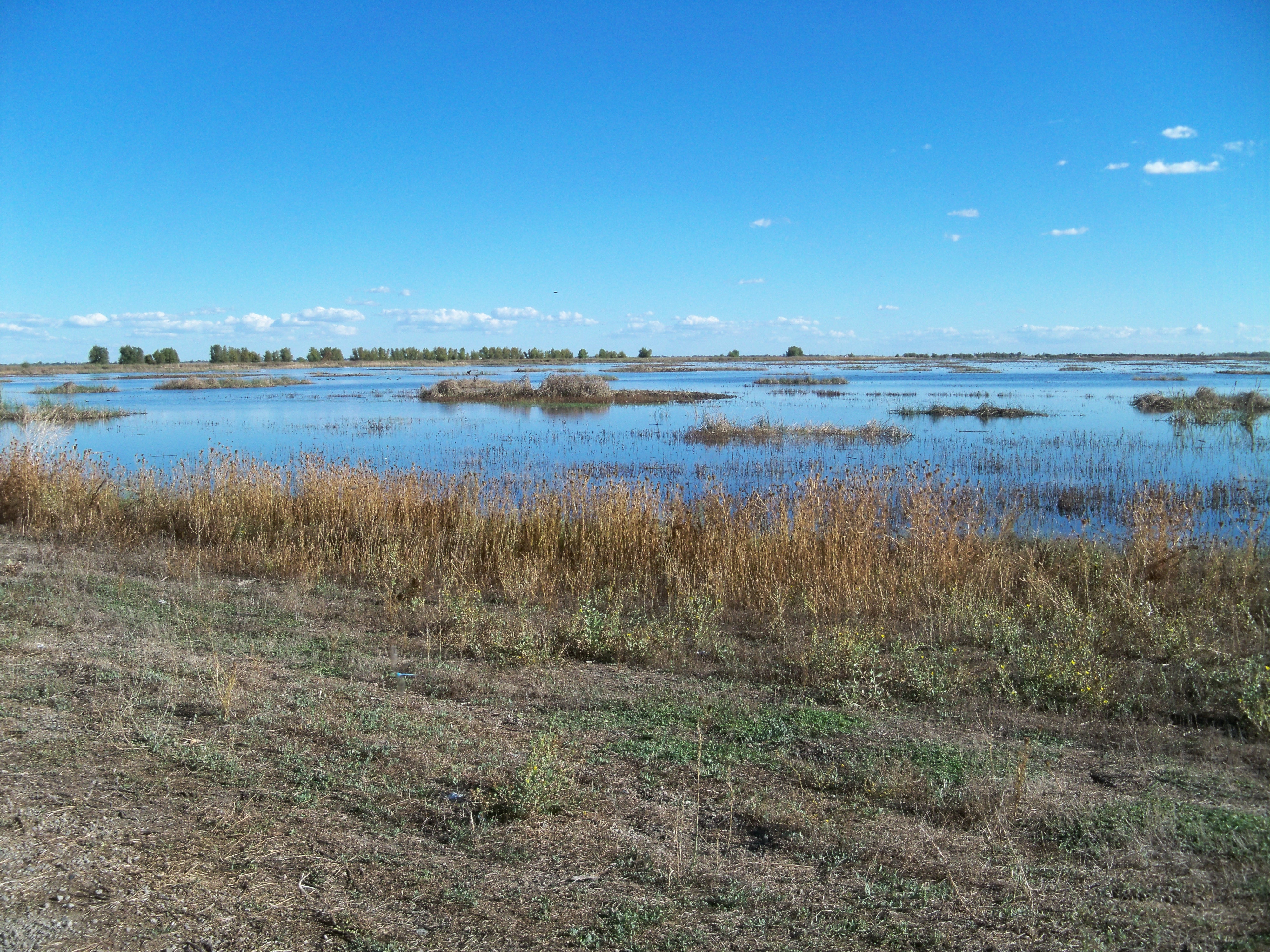 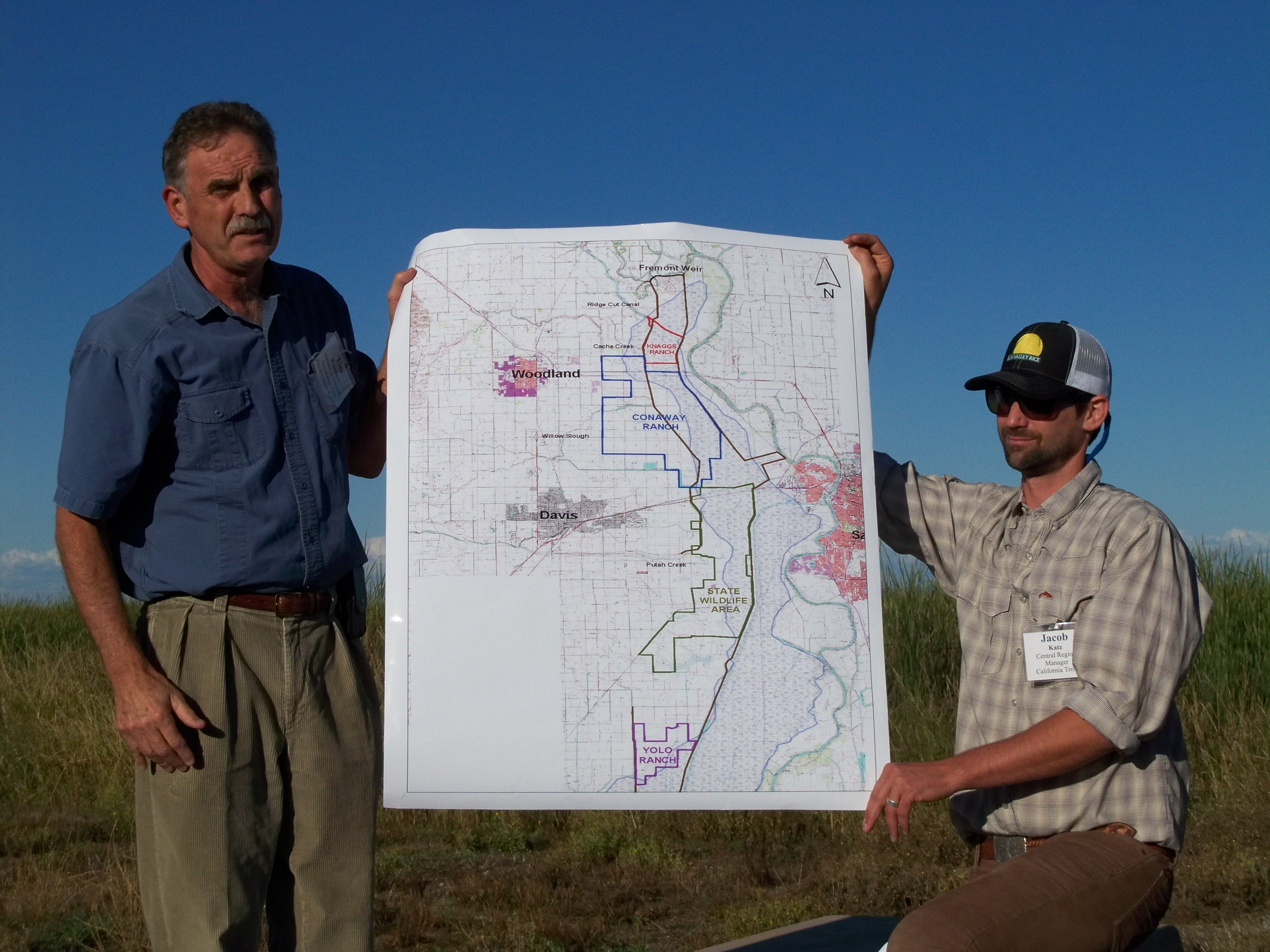 At the Yolo Bypass Wildlife Area: We learned about the managed wetlands and farmland of the bypass, which provides both flood protection and wildlife habitat.  Robin Kulakow (Yolo Basin Foundation) also described the wetlands education programs that take place within the bypass (bat tours, anyone?).  Jacob Katz (California Trout) told us about the innovative Knaggs Ranch pilot project to raise juvenile salmon on flooded rice fields (it doesn’t have to be fish or farms), and Tim Washburn (Sacramento Area Flood Control Agency) described the benefits of relocating the Sierra Northern rail line. 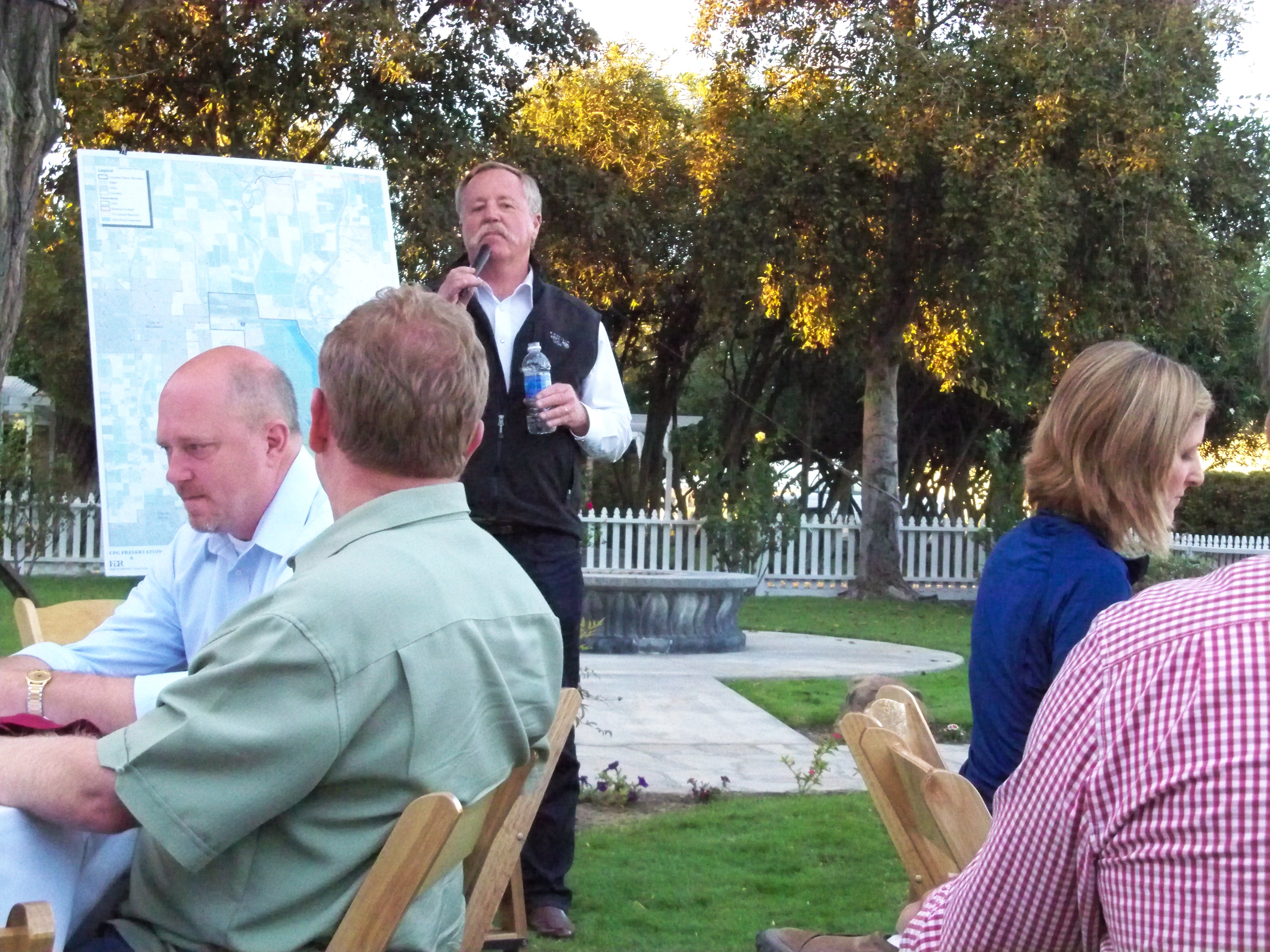 We finished out the long day with a delicious dinner hosted at Conaway Ranch. Bob Thomas (Manager of Conaway Ranch; pictured) and Steve Thompson (Steve Thompson LLC) shared about the myriad habitat, education, and other projects underway at the Ranch.

Read the Coalition’s letter to the Governor, listing the 43 near-term Delta projects.

Rebecca Crebbin-Coates is the Water Campaign Manager at the Planning and Conservation League.