In October of last year, Governor Newsom signed an executive order that set forth a goal to protect 30% of California’s lands, rivers, and oceans by 2030. This order followed the tragic defeat of AB 3030 in committee and instructed the California Natural Resources Agency (CNRA) to develop a strategy for how to accomplish this goal by February 2022. In order to accomplish this, the CNRA was mandated to develop the California Biodiversity Collaborative to bring together tribes, experts, and stakeholders to give feedback on the strategic plan.

The CNRA has recently announced a first set of workshops in each region of California to discuss the development of the initial plan. Please take a moment to review the image below to find out when the workshops will be held in your region. We ask that you join PCL in attending the workshops to ensure the CNRA prioritizes protecting biodiversity and providing equitable access to the newly conserved lands. 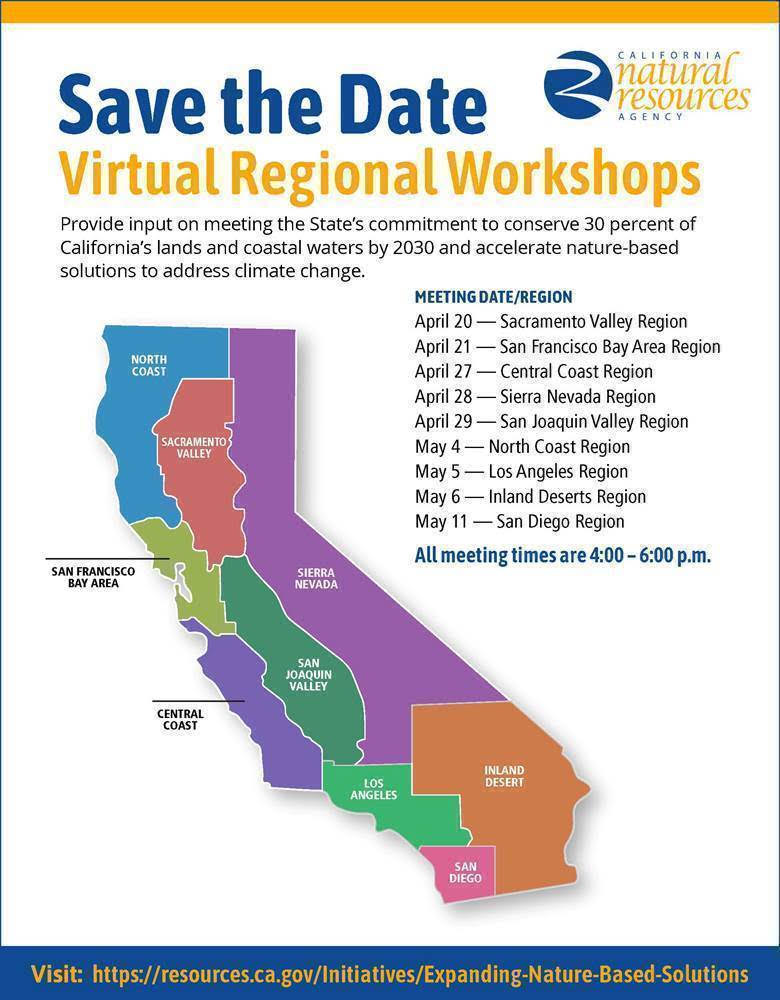 It is currently estimated that 22% of California’s land and 18% of California’s coastal water are protected. However, if we want to live sustainably with nature, getting to 30% is just the first step. Scientists have warned that 1 million species are at risk of extinction across the world and that protecting half of Earth’s surface by 2050 is a sure way to prevent these species from becoming extinct. President Biden has also announced in January that the “30 by 30” is a nationwide goal. It is important for California to develop a comprehensive plan for accurately protecting 30% of its land as it will serve as a role model for the rest of the nation.

Our planet’s wildlife is in danger of extinction. One-third of all American species are endangered or vulnerable to extinction and California has 305 of its species listed under the Endangered Species Act. The leading causes of this biodiversity are habitat loss and habitat fragmentation caused by human sprawl and development and natural resources extraction. By setting aside land for conservation, we can help stop the destruction of habitat and allow species populations to bounce back. We need your help to encourage the conservation of land in a way that is protective of local biodiversity.

If you are interested in helping guide the CNRA in developing a sound plan for reaching the “30 by 30” goal, please join us in attending the regional workshops starting on April 20th. Click here to learn more about the regional workshops and to register for the workshop in your area. Click below to access PCL’s template talking points to help guide the CNRA in adopting strategies that increase biodiversity and ecosystem health and improve access to nature and wilderness areas for all in the “30 by 30” plan.