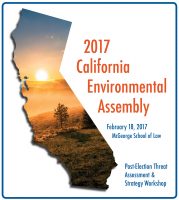 On February 18, 2017 the Planning and Conservation League hosted a day of professionally facilitated workshops across multiple sectors and issue areas in an attempt to develop an assessment of the threats and opportunities that the current Federal administration poses for California policy, and to begin to identify ways that we can work better together to address these questions in the months and years to come.

If you were in attendance that day, we thank you greatly for your participation in what turned out to be a compelling and inspiring conversation. If you were not able to attend, we hope that you will be a part of the conversation moving forward. What follows is a synthesis of the huge amount of input that was captured at the event highlighting the themes that emerged across the workshops in identifying key areas of concern and opportunities for coordinated action.

First and foremost, what emerged from the day is that there is a lot of fear out there—but also that, despite great challenges ahead, we as Californians are very prepared to protect our values from the federal administration, and to continue to be a leader of progressivism for the nation and the world.

Participants were loud and clear that they do not want to be so distracted by what is happening in D.C. that we lose focus on what we can do here, at the state level, and locally.

There was an emphasis that we should rely on the existing coalition infrastructure, rather than create a new one—but that better coordination between existing networks and across sectors is needed. And there was a pointed emphasis on building new partnerships—to bridge human rights and environmental movements, to work better with the private sector and with government at all levels.

While the lack of band-width for those of us in the advocacy community was roundly recognized, there was also an expressed sense of urgency for the need to continue this conversation.

Focus on opportunities, not threats – Be pro-active, not reactive. The primary policy recommendation of the day was that Californians should work to enact state and local policy that will safeguard (or go beyond) Federal protections we now rely on.

Build on, but improve, what we have – We want to build upon the great work already being done by California’s existing framework of organizations and coalitions, but we need to develop the tools for better, nimble, coordination and communication between coalitions and interests.

Looking forward, PCL is prepared to host a series of periodic roundtable discussions to address the three major recommendations above. We want to bring together a spectrum of coalition representatives and cross-sector stakeholders to track concerns as they evolve and further identify key opportunities to fortify California policy and practice. However, in order to do this work more effectively moving forward, we want the primary function of this roundtable to be the exploration of how the suggested coordination/communication platform could take shape. If you would like more information on this roundtable, please contact us at events@pcl.org.

While this effort has an explicit purpose to provide better coordination around the Federal questions we currently face, this is also about building a faster, stronger, more inclusive movement for the future that speaks to all of our interests.

What are the Threats, Opportunities, and Strategies?

There were many repeated threats identified across the workshop discussions, including: loss of Federal funding across the spectrum of social and environmental programs, housing, transit, conservation, climate research etc.; declines in Federal enforcement activity across the spectrum; loss of national labs, federal data and/or access to data; and ever increasing “fake news” and misinformation.

Repeated concern was also expressed for degradation of social protections, increasing income inequality and disparities of privilege, and repeal of the Affordable Care Act. Concerns for immigrants/immigration were also notably prominent.

The primary opportunity, echoed through the workshops, is that “CA sits on powerful platform of cultural change and progressive politics.” It was said that, despite challenges, we are making progress, and that new, broader partnerships are possible due to the “intensity of public sentiment.”

More specific opportunities identified included: the use of a Federal infrastructure push/bill to benefit CA priorities with chances to better align housing, transportation and environmental issues; the prospect of California establishing its own laws to back-fill lost federal protections; and the use of our collective power to organize around and affect the mid-term elections.

There were far too many notable strategies posed, both general and specific, to be able to list here. Please see the attached workshop summaries for the complete input, but there are some major actionable take-aways to hold on to.

First, we as Californians are interested in focusing on the opportunities: on what we can do locally and at the state level proactively, rather than waiting to react to what the federal administration does. Secondly, the resounding strategy identified do so is to immediately begin work to establish CA law and local policy that will fortify us from the loss of any federal protections we rely on now.

All this said, “Constitutionalizing our practice” to anticipate gaps left by withdrawal of Federal protections was the primary theme, and key laws that were repeatedly focused on were: the Clean Water Act, the Clean Air Act, and the Endangered Species Act. The question of the limits of Federal Preemption looms large here. “Drilling down” on preemption law to seek an appropriate balance of Federal & State law that protects our policies and our values was a clearly identified priority.

In this vein, California is already taking action in the legislature in some of these key areas with proposed bills that include (but are not limited to) the following:

How do we work better together?

As stated above, there was a clear emphasis that we should rely on the existing coalition infrastructure, rather than create a new one—but that better coordination between existing networks and across sectors is certainly needed on the Federal questions we face. And again, while the lack of band-width in the advocacy community for another coalition (or even another call) was explicit, there was also an expressed need for continued coordination of this conversation that augments existing efforts.

While the participants are wary of duplicative efforts, it was also stated that there is a need to “Create space and openings for different ways of interacting.” The need to develop a strategy for how to work together was called for— “We need to prioritize, a strategic discussion on resource allocation, to prioritize resources to address cross-cutting issues and disciplines.” And there’s a desire for a unifying vision—what is the “Integrated Environmental Strategy?” “What is the Affirmative California Vision?”

The other major take-away was the very strong desire to diversify the movement and to bridge human rights and environmental advocacy—a greater inclusion of equity, EJ, civil rights, and immigration interests in the environmental movement was particularly strong. The current opportunity to build new partnerships with unusual suspects came up in every discussion—state, fed and local governments, other state governments; national NGOs and networks, red & blue districts, green tech and the private sector, immigrants, tribes, the travel & recreation industry, farmers, taxpayer groups, non-construction labor, faith communities, communities of color, youth, and more. For all of these groups, greater public participation was called for. First, they need to be invited to the table, but for many new players, mentoring and training is needed as well.

The most definitive coordination-oriented priority expressed across the workshops was the need for an effective communication structure—something “lean” and “secure.”  An online info-sharing mechanism called for (over and over) specifically—a “one-stop shop” for: who is doing what, when, where; events, actions, campaign activities; media reports and issue briefs; data, resources, directories of experts and advocates.

PCL is committed to facilitating a conversation around how best to shape such a communication platform in an ongoing roundtable of coalition representatives and stakeholders across interest and sectors. In cooperation with new and existing partners, we hope to identify and develop a feasible, effective and efficient coordination tool that will not only help us track and anticipate Federal concerns, but build a wider stronger progressive movement well into the future.

Schedule of the 2017 Assembly 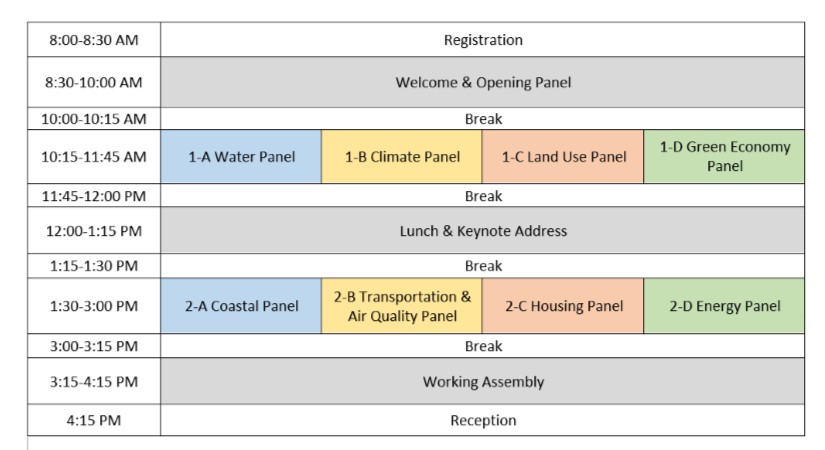 Participants in the 2017 Assembly

Thank you to our Sponsors & Co-Hosts of the 2017 Assembly